Don’t miss out on hearing about what this project will mean for the future of Wodonga.

Australian Gas Infrastructure Group (AGIG), a major player in gas infrastructure in Australia and ENGIE, a global reference group in low-carbon energy and services have announced the securing of $32.1M in government funding to support the delivery of a new hydrogen blending project in Wodonga, Victoria – known as Hydrogen Park Murray Valley (HyP Murray Valley).

The Australian Hydrogen Centre selected Wodonga as the most suitable location to develop this blending project through a multi-criteria analysis of more than 30 potential areas. The location choice considered the characteristics of the gas network and associated infrastructure to deliver a renewable hydrogen production hub in Wodonga that is aimed at decarbonising local gas supply, industry and the transport sector.

Guest Speaker, Vikram Singh leads hydrogen development at the Australian Gas Infrastructure Group (AGIG), driving the transition of the gas sector towards a zero carbon future. Having delivered the largest renewable hydrogen production facility in Australia, Vikram has been instrumental in developing a pipeline of renewable hydrogen projects, with over 600 MW of projects in delivery and feasibility assessments.
Prior to AGIG, Vikram was a partner at Deloitte Access Economics, Australia and specialised in the energy and utilities sector. He has also held senior management positions at Singapore Power and Powercor Australia.
Vikram’s strength is identifying opportunities resulting from policy reform and market disruption. He has always operated at the forefront of innovative and transformational initiatives, including M&A transactions, project development, electricity and gas wholesale markets, regulated networks, privatisation, renewables and decarbonisation.
With deep experience across the energy sector, Vikram is well placed to lead energy companies through market reform and transition towards a net zero future. 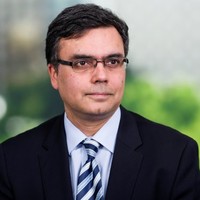 Weekly informative and engaging newsletters straight to your inbox. Get the latest courses, local events, business support and advice. Members have the exclusive opportunity to submit advertising or content that is shared to our newsletter subscription list.